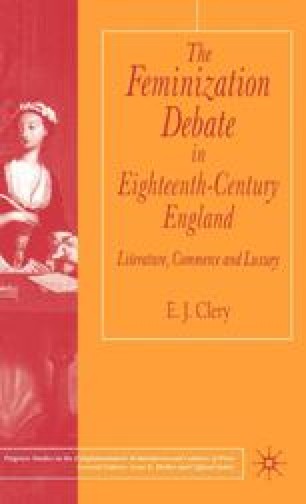 Clarissa and the ‘Total Revolution in Manners’

In an appendix to Sir Charles Grandison, Samuel Richardson refers to his three novels in a way that suggests he saw them as a continuous historical chronicle.1 The action of Pamela (1740), he says, takes place within thirty years of its publication, that is to say, after 1710; Clarissa (1747–48) within twenty years of its publication, therefore in the late 1720s or 1730s; and Grandison (1753–54) depicts ‘scenes of life carried down nearly to the present time’ (G III: 470). The brief remark opens up a vision of the works as a vast study of transformations in sexual politics through three generations. It also gives a new dimension to his description of the novels as ‘histories’. This is generally taken to mean ‘true to life’.2 I want to propose that they should be understood as conscious registers of recent times and more specifically as works that anticipate the genre of ‘general history’ introduced by Voltaire and Hume, with its focus on the transformation of manners.3 The novels trace the origins of the current crisis in thinking about social and economic change, responding to issues that were still in pressing need of resolution. I would argue that when Richardson decided to retain The History of a Young Lady as the subtitle to Clarissa as opposed to Aaron Hill’s apt suggestion, A Lady’s Legacy, it was because history, in the sense of recording and interpreting the past, was the essence of the work. In the title of his final novel, The History of Sir Charles Grandison, ‘history’ is given pride of place.

Moral Progress Female Orgasm Moral Hypocrisy Moral Reform Pretty Girl
These keywords were added by machine and not by the authors. This process is experimental and the keywords may be updated as the learning algorithm improves.
This is a preview of subscription content, log in to check access.

Cite this chapter as:
Clery E.J. (2004) Clarissa and the ‘Total Revolution in Manners’. In: The Feminization Debate in Eighteenth-Century England. Palgrave Studies in the Enlightenment, Romanticism and Cultures of Print. Palgrave Macmillan, London. https://doi.org/10.1057/9780230509047_6