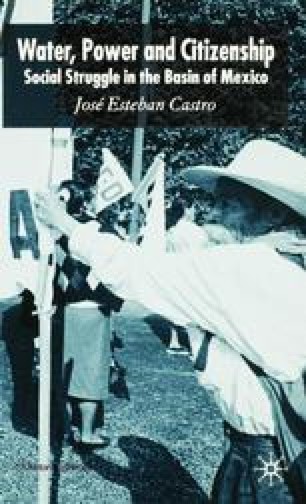 Water and Power in the Basin of Mexico

We have just explored the long-term processes that irreversibly changed the Basin of Mexico’s hydrogeology and waterscape. In this chapter we examine this transformation from a different angle, elaborating on Norbert Elias’ suggestion that processes of human control over the non-human world are inextricably interwoven with processes leading to the formation and reproduction of forms of social control at the inter-human level (Elias, 1978: 156–7; 1994: 443–56). We pay particular attention here to the process of state formation in Mexico, looking at how human activities aimed at controlling and managing water were inextricably linked to processes of social and political control. This chapter is also organized chronologically and considers (a) the evolution of power configurations in relation to water control (for example, the balance between coercion and cooperation in the interaction between Spaniards and Indians during the colonial period or the changing character of the public-private interface), (b) the social and political influence of water experts (for instance, the role played by specialized water techno-bureaucracies), (c) the crystallization of power structures related to water control (such as in the state apparatus, in the legal system, and so on), and (d) the links between water policy and the development of modern citizenship rights, although we address citizenship in more detail later.

Mexico City Water Control Flood Control Federal District Indian Worker
These keywords were added by machine and not by the authors. This process is experimental and the keywords may be updated as the learning algorithm improves.

‘[The] basic tissue resulting from many single plans and actions of men can give rise to changes and patterns that no individual person has planned or created. From this interdependence of people arises an order sui generis, an order more compelling than the will and reason of the individual people composing it. It is this order of interweaving human impulses and strivings, this social order, which determines the course of historical change; it underlies the civilizing process.’—Norbert Elias, The Civilizing Process