Art and the State 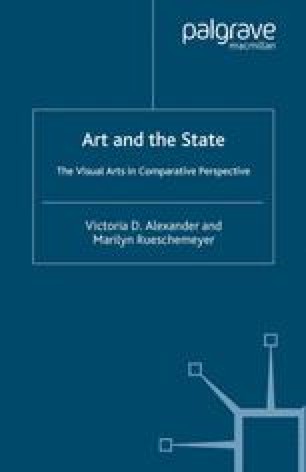 East German Art Before and After the Fall of Communism

For 40 years after World War II and for 70 years after World War I, communist rule established a relationship between the arts, the state, and the society — first in the Soviet Union and later in the eastern European countries — that differed radically from the place of art in the capitalist west and from the lines of historical development which had shaped European art for many generations. Since the nineteenth century, art and artists had become more and more emancipated from particular patrons and oriented to the market. In the process, autonomy for individual expression increased greatly, while innovation and experimentation became norms that dominated critical discourse as well as the upper-end marketplace. Artistic developments in the Soviet Union as well as in eastern Europe after World War II took off from this modern experimental art of the late nineteenth and the early twentieth century. But the thrust of communist rule and its transformations over time gave art a place in politics and society that was radically at odds with central tendencies of modern art, which included the premium on experimental innovation and, at least for a significant minority, the critique of established culture and society.

German Democratic Republic National Gallery Communist Rule Communist Period Christian Democratic Party
These keywords were added by machine and not by the authors. This process is experimental and the keywords may be updated as the learning algorithm improves.

The research on which this chapter is based was carried out in 1998 and 1999, and supplemented with additional conversations and gallery visits during fall 2003. An earlier project on east German art institutions during the communist period and the immediate transformation was done in 1987–88 with a follow-up visit in 1990 (Rueschemeyer, 1991). During all these return visits, I tried to revisit some of the artists and colleagues working on the arts as well as union functionaries. In addition, I met with people important in the art world a decade after the end of the communist period, art historians, artists, gallery owners and managers, representatives of the Professional Association of German Artists, and politicians involved in cultural policy on the local, state, and national levels. Most of these talks are detailed in the notes to this chapter. The comments on art and the state in eastern Europe are not only based on recent literature but also included visits and interviews with artists and gallery managers in the Czech Republic and Poland, intensive discussion at a workshop on the arts after the end of communism at the Rhode Island School of Design in 1998, and participation in panels at the World Congress of Sociology in 1998, the American Sociological Association (ASA) in 2000, and the American Association for the Advancement of Slavic Studies in 2002.