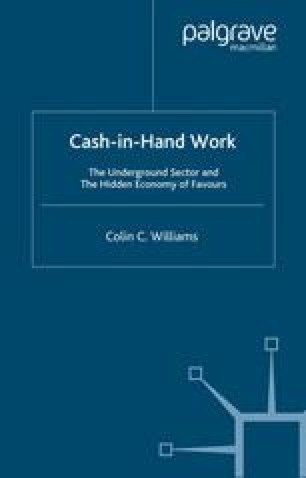 In the last two chapters, the policy options of deterring and doing nothing about cash-in-hand work have been evaluated critically. Recognising that cash-in-hand work is composed of not only the underground sector but also a moral economy of paid mutual aid, it has been argued that pursuing a deterrence approach is both impractical and undesirable. It is impractical not only because deterrence alone seems incapable of stemming the underground sector but also because the moral economy of paid mutual aid is heavily embedded in everyday life. It is undesirable because eradicating paid mutual aid would destroy one of the principal means through which people now cement and build social capital, especially in deprived populations. A laissez-faire approach towards cash-in-hand work, meanwhile, has been shown to leave intact the underground economy whilst doing little or nothing to facilitate the engagement of that significant minority of people currently excluded from participating in the hidden economy of favours who are perhaps most in need of the benefits that come from such engagement. If these policy options of deterring or doing nothing about cash-in-hand work are inappropriate, then what should be done about this heterogeneous sphere of activity? In this chapter, a third and final possible policy option is considered, namely that of harnessing such work.

Social Capital Policy Option Social Economy Formal Employment Underground Economy
These keywords were added by machine and not by the authors. This process is experimental and the keywords may be updated as the learning algorithm improves.
This is a preview of subscription content, log in to check access.