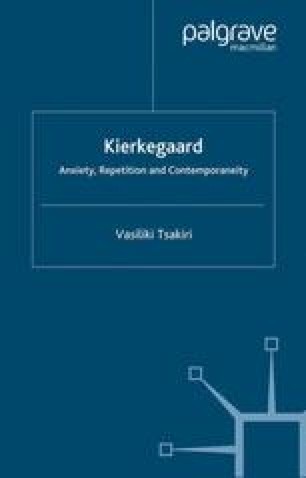 The Topos of Anxiety

Is it possible — even desirable — to treat anxiety as a concept? This is a compelling question which everyone attempting to come to terms with Kierkegaard’s philosophy has to face. In effect, it can be argued that only provisionally can anxiety (dread in some translations of Kierkegaard’s works) be considered a pivotal concept in Kierkegaard’s thought, since to treat anxiety as a concept proper would amount to failing to acknowledge its ‘abysmal’ qualities. In Kierkegaard’s formulation, anxiety by its nature stands beyond definition, making the task of giving it a proper definition almost impossible. Paradoxically, Kierkegaard’s observation is consonant even with Kant’s analysis of concepts, which dictates that one should not attempt a definition of the concepts, for on the one hand, in the case of empirical concepts, one can never be certain about their limits and originality, and, on the other, in the case of a priori concepts, one can never be certain about the completeness of the analysis. Thus, definition can be applied only to ‘invented concepts’, where the inventor is seen as having the right to set limits (CPR, p. 587). Arguably anxiety should not be considered an invented concept and consequently even under the scrutiny and strictness of Kant’s analysis, the concept is amenable only to exposition (see Kant’s discussion regarding ‘invented concepts’ in CPR, p. 587).

Pure Reason Empirical Concept Divine Command Philosophical Knowledge Pivotal Concept
These keywords were added by machine and not by the authors. This process is experimental and the keywords may be updated as the learning algorithm improves.
This is a preview of subscription content, log in to check access.