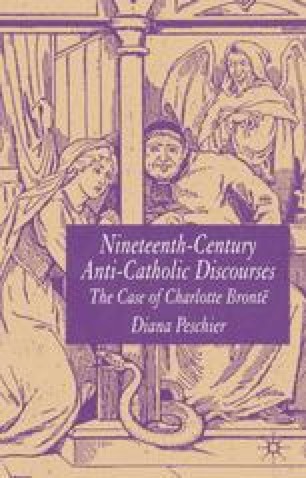 The reading of Charlotte Brontë’s novels, particularly Villette, as being essentially anti-Catholic has become almost routine among her critics.1 Lisa Wang refers to the fact that the use of Catholic religious discourse in the Brontës’ writings is isolated to Charlotte Brontë’s novels where it is undertaken from a Protestant perspective.2 It is widely accepted that Charlotte Brontë’s perception of Catholicism was nourished by the cultural climate of the time and in particular the response to ‘papal aggression’ during the early 1850s. In her early works, the Juvenilia, there is mention of Catholicism. For example, in The Tales of the Islanders there is reference to Catholic Emancipation. Brontë has a traveller recounting how he found Roman Catholicism in Southern Ireland to be wicked and associated with necromancy. Given the Brontë’s Protestant, Irish background it is not surprising that the young Charlotte should hold certain views about Catholicism but as Christine Alexander has noted in her book on Charlotte Brontë’s early writing, it would be wrong to exaggerate the importance of the Juvenilia to her later work. ‘As Charlotte grew older and saw more of life, especially during her years in Brussels, her new fund of experience would replace the Angrian plot.’3 Alongside the stories in the national press and the type of fiction examined in this book, the Brontë’s local newspapers, the Leeds Intelligencer and the Leeds Mercury, were full of reports of Romish influence and St Saviours in Leeds was highlighted as a centre for the shift towards Catholicism in the Protestant church.4

Young Girl Local Newspaper Catholic Priest Protestant Church Lunatic Asylum
These keywords were added by machine and not by the authors. This process is experimental and the keywords may be updated as the learning algorithm improves.