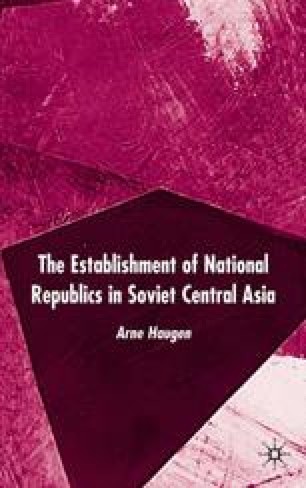 “We Have Rights Too!” — The Dynamics of Division

We have now seen how both continuity and change characterized the Central Asian communists’ conceptualization and utilization of national identities. In the cases of “Turkmen”, “Kazak” and “Uzbek”, the increasing importance of national identities was not simply a consequence of the delimitation. Well before the new national republics were established, a nationalization of political discourse was already taking place that prefigured the institution of new political entities. The delimitation contributed to this phenomenon, but did not create it. On the other hand, the case of the Tajik identity was different. When “Tajik” took on increasing importance in Central Asian political life in the latter part of the 1920s, this was primarily the result of a policy that followed the national delimitation. In this chapter, I demonstrate that the national delimitation itself was a dynamic process. When the delimitation process first began, it appears to have triggered a dynamic, the final result of which was markedly different from how Soviet authorities had initially planned. It was this dynamic that led to the establishment of Kyrgyz and Karakalpak political entities in connection with the national delimitation in 1924.

National Identity Central Committee Political Entity Kyrgyz Republic Union Republic
These keywords were added by machine and not by the authors. This process is experimental and the keywords may be updated as the learning algorithm improves.
This is a preview of subscription content, log in to check access.