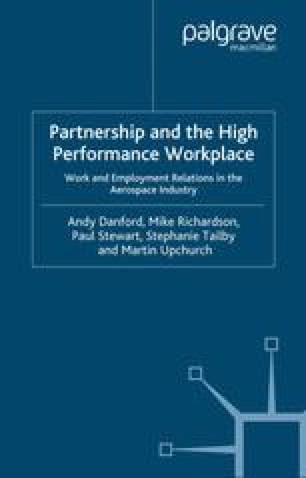 Partnership and the High Performance Workplace pp 136-166 | Cite as

In the unionized sectors, partnership is fast becoming the new orthodoxy in British industrial relations. This is partly a function of employer responses to intensified global competition and neo-liberal imperatives. It is also a function of the post-1997 shift in politicoeconomic conditions and in particular, successive Labour Governments’ quest for a ‘modernization’ of workplace relations. In this context, as Martínez Lucio and Stuart (2002a and 2002b) have argued, partnership is central to a modernizing agenda because it is seen as a means of permanently substituting co-operative relations for class conflict at work. The new co-operative relations are predicated on an extension of employee rights and a commitment by organized labour to work with employers, rather than against them, in the interests of improving organizational performance.

Trade Union Employment Relationship Union Strategy Union Representative Union Participation
These keywords were added by machine and not by the authors. This process is experimental and the keywords may be updated as the learning algorithm improves.
This is a preview of subscription content, log in to check access.