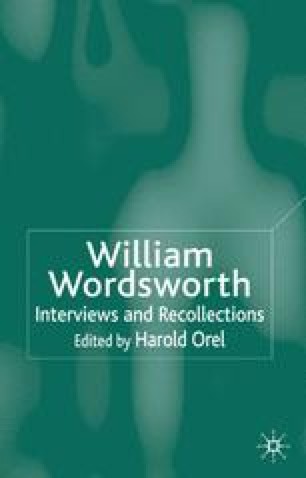 John G. Lockhart’s biography of Sir Walter Scott (his father-in-law) was but recently published when Wordsworth, responding to a gift copy, wrote to Lockhart describing Scott as a man who lived ‘a favored and happy life’, who had carried on his anonymity too long; alas, ‘the burthen of secrecy’ had been contrary to his ‘open genial nature’. The misfortunes plaguing the latter part of his life constituted a moral lesson, since Scott had responded to adversity in a way that provided ‘much consolation both for those that loved him, and for Persons comparatively indifferent to his fate’. Wordsworth did not praise the biography, and chose not to discuss it in any detail. Lockhart thought that Wordsworth had seen the book as a broad-brush tribute to Scott, and (though he had raised the possibility that the book might be considered too long) he resented Wordsworth’s willingness to agree that it was. He was annoyed by Wordsworth’s correction of ‘a few trifling inaccuracies’.

Happy Life Moral Lesson Prose Writer Complimentary Copy Great Spirit
These keywords were added by machine and not by the authors. This process is experimental and the keywords may be updated as the learning algorithm improves.
This is a preview of subscription content, log in to check access.