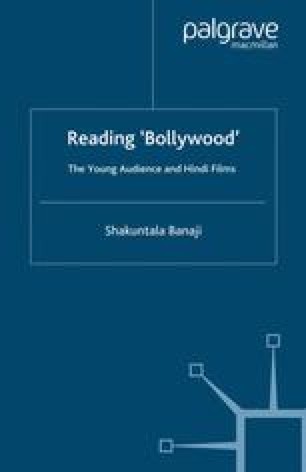 By and large female viewers in my sample, while frequently wishing to speak of violence and prejudice, were less likely to mention the topic of terrorism in relation to films than their male counterparts. Ismail, a working-class, 19-year-old in Bombay, 16-year-old British-Bengali Jomir, and 24-year-old Harish, whose comments regarding Hey! Ram were quoted in Chapter 7, represent a cross-section of the young men in my sample and it is to their comments that this chapter is primarily devoted. The films spoken of by these three young men — Maachis (Sampooran Singh Gulzar 1996), Fiza (Khaled Mohammad 2000) and Mission Kashmir (Vidhu Vinod Chopra 2000) — form a springboard for the young men to speak of aspects of their politics and beliefs. In all three films, and despite their very confused sympathies and very different ideological standpoints, sympathy for the hero — who is provoked or impelled to seek personal justice or revenge by entering a terrorist organisation — is the one factor that unites these three very different viewers.

Terrorist Group State Violence State Repression Terrorist Organisation Young Audience
These keywords were added by machine and not by the authors. This process is experimental and the keywords may be updated as the learning algorithm improves.
This is a preview of subscription content, log in to check access.