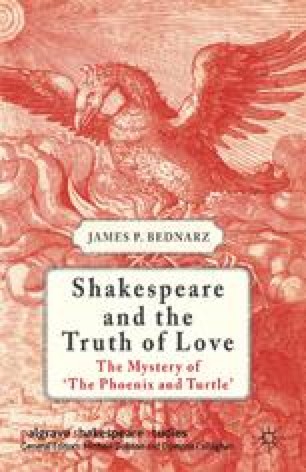 Although theological paradox is vital to the meaning of ‘The Phoenix and Turtle’, it is not a devotional poem, even if to call it ‘secular’ would be almost as misleading. George Santayana in ‘The Absence of Religion in Shakespeare’ concludes that one would hardly believe that he had a religion, because although religious sentiments are uttered in his work, they are not given ‘their original meaning’.1 The poet, with a few notable exceptions, gazes on the here rather than the hereafter. The recent ‘turn to religion’ in Shakespeare studies has in multiple and often contradictory ways addressed Santayana’s challenge. In light of this ongoing reassessment, one might still say that ‘The Phoenix and Turtle’ is not ‘Christian’, because even though in it Shakespeare evokes one of Christianity’s foundational beliefs, and even though some of its prominent liturgical elements are decidedly Christian, it does not constitute a testament of faith.

Dead Bird Catholic Priest Secret Code Classical Deity Religious Sentiment
These keywords were added by machine and not by the authors. This process is experimental and the keywords may be updated as the learning algorithm improves.
This is a preview of subscription content, log in to check access.