Labour Relations and the New Unionism in Contemporary Brazil 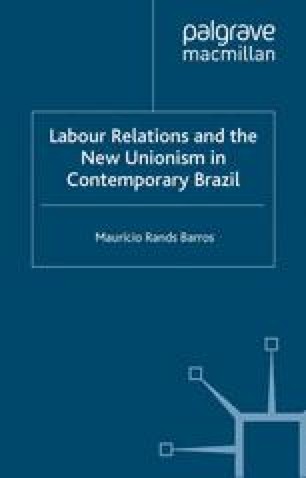 This book is about Brazilian workers. It identifies their return to the public arena from 1978 onwards as a turning point in their quest for full citizenship in a country where the majority of the people are still pre-civic. When, throughout the 1980s, the labour movement was fading elsewhere, the Brazilian workers rose up against a democratisation engineered through a pact between the elites and forced the agenda to induce a higher priority for the social question. Their mobilisation, epitomised in the advent of the so-called ‘new unionism’,1 paved the way to a new conception of labour relations and succeeded in addressing issues far beyond the limits of capital—labour relations. They resisted iniquitous working conditions and the steady process of wage deterioration in a decade hit by economic stagnation and soaring inflation. In this journey they cemented a broad alliance with the rest of the Brazilian people, having incorporated demands for health care, education, housing, improvement of social services, land reform and against the high cost of living. Very often these demands were summarised in the ‘quest for citizenship’.

Labour Relation Alternative Conception Political Culture Occupational Category Social Conflict
These keywords were added by machine and not by the authors. This process is experimental and the keywords may be updated as the learning algorithm improves.
This is a preview of subscription content, log in to check access.