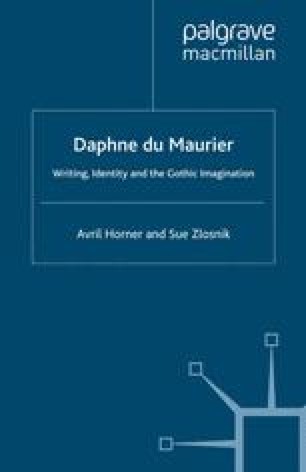 The two major novels of the 1950s, My Cousin Rachel (1951) and The Scapegoat (1957), in spite of their differences in setting and period, do have significant similarities. Although the former is an historical novel set in the Cornwall of the early nineteenth century and The Scapegoat is set in contemporary rural France, both are first person narratives and in each case the narrator is a man; thus du Maurier in the 1950s reverts to the male narrative persona with which she had experimented in the early novel, I’ll Never be Young Again. In both novels, too, the notion of ‘foreignness’ is used to explore divisions within the subject. This is represented in the first novel by the half-Cornish, half-Italian Rachel who is culturally more akin to her Italian mother than her Cornish father. In the second the representation is much more complex as the narrator, John, finds himself the foreigner in a French context where he has unwillingly changed identities with his French double, Jean de Gué. My Cousin Rachel echoes both Rebecca and The King’s General in exploring identity through a triangulated relationship, in this case between the narrator (a young man called Philip Ashley), his dead cousin Ambrose and Ambrose’s widow, Rachel.

Family Business Foreign Affair Obsessional Passion Christmas Tree Solitary Life
These keywords were added by machine and not by the authors. This process is experimental and the keywords may be updated as the learning algorithm improves.
This is a preview of subscription content, log in to check access.