Crime and Security: Managing the Risk to Safe Shopping 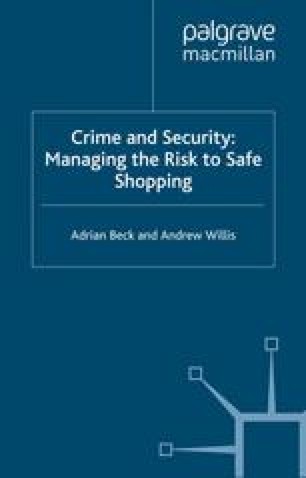 Crime and Security: Managing the Risk to Safe Shopping pp 179-199 | Cite as

CCTV and the ‘High-Tech Fix’: Some Unanswered Questions

While there is a lack of reliable information to confirm the effectiveness of CCTV there is an over-abundance of data to show that the shopping public and others are strongly supportive of it. In the current study over nine in ten shoppers thought that CCTV was very acceptable or acceptable and over four in five managers thought it to be effective. These findings confirm the results of earlier studies. The general public is strongly in favour of the use of CCTV in shops to counter the threat of terrorism — at the 80 per cent level (Beck and Willis, 1993a, 1993b and 1994a); and there is as much or more support for CCTV as a general crime control measure in the retail sector (Beck and Willis, 1992, 1994b and 1995; Honess and Charman, 1992). Closed circuit television is decidedly not resented as an unwarranted, ‘big brother’ infringement of civil liberties.

Unanswered Question Crime Prevention Civil Liberty Crime Control Shopping Centre
These keywords were added by machine and not by the authors. This process is experimental and the keywords may be updated as the learning algorithm improves.
This is a preview of subscription content, log in to check access.

Cite this chapter as:
Beck A., Willis A. (2006) CCTV and the ‘High-Tech Fix’: Some Unanswered Questions. In: Crime and Security: Managing the Risk to Safe Shopping. Palgrave Macmillan, London