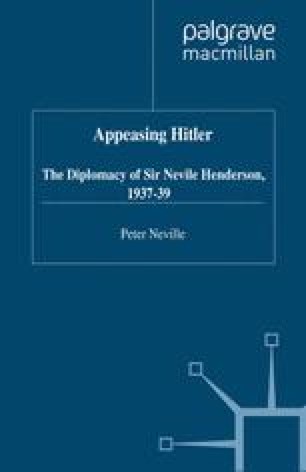 From the May Crisis to the Nuremberg Rally, May–September 1938

The May Crisis of 1938 was clearly a very unsettling experience for Henderson. His despatches in the three months that followed it were full of references to the need to avoid such alarms and excursions; again (a lengthy telegram to Halifax on 12 August, for example, stated that ‘We cannot keep having May 21sts’).1

Test Mobilisation Nobel Peace Prize Personal Message British Policy Private Letter
These keywords were added by machine and not by the authors. This process is experimental and the keywords may be updated as the learning algorithm improves.
This is a preview of subscription content, log in to check access.