Uneven Development in the Third World 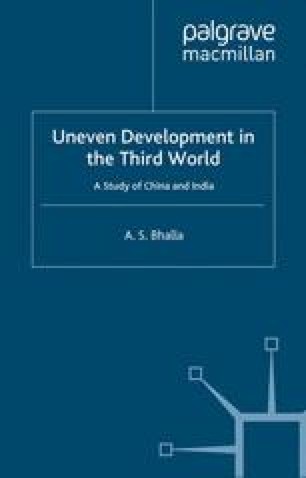 Uneven Development in the Third World pp 63-102 | Cite as

In Chapter 3, we briefly discussed the most recent development strategy of economic liberalisation adopted in both China and India. This chapter attempts a more in-depth analysis of this on-going process, accelerated since the early 1990s in both countries. In China, after a temporary slow-down of the reforms subsequent to an overheating of the economy and social unrest in 1989, the process has once again accelerated. On the other hand, in India, the pace of implementation of reforms which were effectively launched during 1991, seems to have slowed down, not for reasons of rapid growth or overheating, but largely because the Government enjoys only a narrow majority and faces opposition from such vested interests as bureaucrats, trade unions, political parties and some businesses.

Foreign Direct Investment Foreign Investment Public Expenditure Money Supply Economic Reform
These keywords were added by machine and not by the authors. This process is experimental and the keywords may be updated as the learning algorithm improves.
This is a preview of subscription content, log in to check access.