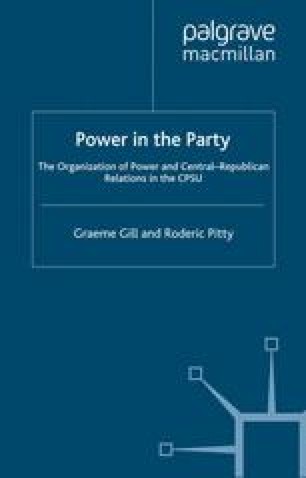 As Chapter 1 argued, a key element in the party press was criticism of lower-level party leaders and their performance of the functions assigned to them. Throughout most of the Soviet period such criticism was not threatening to party leaders because of its routinised nature. Certainly individuals criticised specifically could experience setbacks to their careers, but as a corporate group party leaders were generally not threatened by this discourse. This could change if the discourse changed, with the criticism being jolted out of its routinised forms and escalated to new levels in a sustained fashion. If maintained over time, this could herald a central campaign against lowerlevel leaders as a group with potentially serious consequences for them, as in the early to mid-1930s.1 In the post-Stalin period, such campaigns occurred on two major occasions, under Khrushchev and under Gorbachev, although the latter was actually set in motion by Andropov.

Party Leader Republican Party Party Organisation Party Committee Personnel Policy
These keywords were added by machine and not by the authors. This process is experimental and the keywords may be updated as the learning algorithm improves.
This is a preview of subscription content, log in to check access.