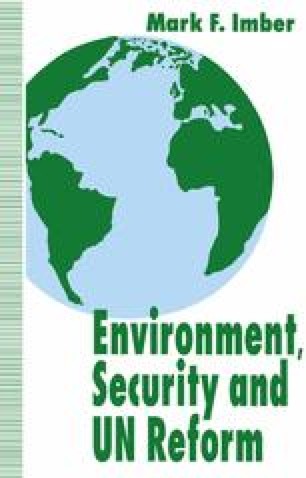 Nuclear weapons have not been exploded in anger since August 1945. The bombing of Hiroshima and Nagasaki directly killed approximately 100 000 persons. Today, the effects of poverty — preventable diseases and hunger — kill 12.9 million Third World children every year. Poverty therefore kills Third World children at the rate of an Hiroshima and Nagasaki bombing every three days.1 This figure can also be expressed as reproducing the six million Jewish dead of the Holocaust every six months. Put yet another way, the world at peace is suffering a rate of child-mortality that exceeds the death-rate of the Second World War. Poverty kills nearly 70 million children over five-and-a-half years. (Compare 58 million dead in the war.) Such avoidable casualties in the struggle for development focus the western mind to reconsider just what is understood by both the terms security and environmental quality, and how the two might be linked.

Environmental Threat Global Environmental Facility Transboundary Pollution Official Development Assistance Global Common
These keywords were added by machine and not by the authors. This process is experimental and the keywords may be updated as the learning algorithm improves.

Then God said, ‘Let us make man in our image, after our likeness; and let them have dominion over the fish of the sea, and over the birds of the air, and over the cattle, and over all the earth, and over every creeping thing that crawls upon the earth.

Robert Burns, To A Mouse