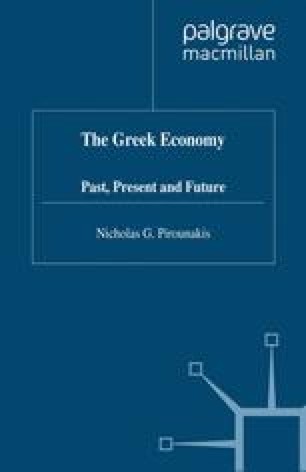 Banking, Insurance, and the Stock Exchange

The importance of banks in Greece cannot be overstated. All the bigger banks, and some of the smaller ones, are owned by the State. The latter traditionally, and, some might say, unscrupulously, has used the banking system, ostensibly in order to streamline the Greek post-war development effort, but ultimately in order to support ‘problem’ companies and inefficient public-sector enterprises (even beyond the point where some of the banks became ‘problem’ cases themselves), in order to finance a government’s political friends of the day, in order to exercise social policy via bank money, and in order to dispose easily and conveniently of treasury bills meant to finance the public-sector debt. That is a pity since the virtual absence of other sources of external business finance until 1987 had assigned to banks the responsibility of seeing that the Greek people’s savings were invested wisely. Indeed, were it not for the Bank of Greece, the country’s central bank, which by and large has done a good job supervising the banking system, the irresponsibility of Greek governments, especially after 1980, would have led many state-controlled banks to direr straits, and much sooner, that has actually been the case. Having said that, it is also true that on many occasions Greek banks have been bulwarks against the rough seas of a frail economy.

Total Asset Stock Exchange Banking System Commercial Bank Foreign Bank
These keywords were added by machine and not by the authors. This process is experimental and the keywords may be updated as the learning algorithm improves.

‘In pursuing a tight credit policy in 1979, the monetary authorities took special care not to create any problems for the financing of particularly desirable activities [].’