Money, Politics in the New Europe 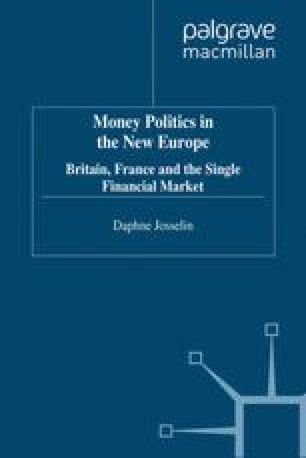 Opening Up a Single Market in Financial Services

The establishment of a common market in financial services was one of the objectives of the EEC Rome Treaty of 1957, its Article 61 stating that: ‘The liberalization of banking and insurance services connected with movements of capital shall be effected in step with the progressive liberalization of movements of capital’. However, for more than 30 years after the signature of the Treaty, its setting up was prevented by restrictions on capital flows and differences in national regulations. The reasons why the opening up of a common market in financial services finally achieved prominence in the 1980s are twofold: importance of the economic benefits expected from such liberalization in the wider context of the 1992 initiative on the one hand; need to create a regulatory framework adapted to the operation of modern financial markets on the other. The EU process was thus part of a wider one, that of the ‘financial services revolution’ (Moran, 1991 and 1994). The latter we shall briefly outline in a first section, before turning our attention to the 1992 package and to its potential impact on British and French financial services.

Financial Service Credit Institution London Stock Exchange Universal Banking Draft Directive
These keywords were added by machine and not by the authors. This process is experimental and the keywords may be updated as the learning algorithm improves.
This is a preview of subscription content, log in to check access.