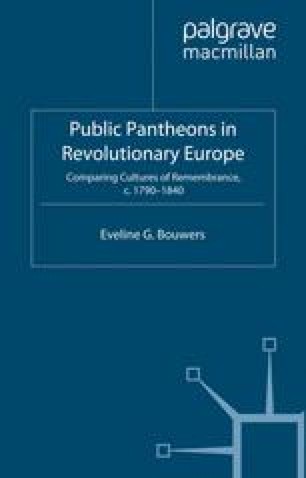 Introduction: The Journey of the European Pantheonic Imagination

In the early afternoon of 18 October 1842, a group of fashionably dressed people gathered on a hill just outside Regensburg, the southern- German city where for centuries the Diet of the Holy Roman Empire had assembled. From that hill, the Bräuberg, the visitors had a magnificent view over the Bavarian hinterland, which included a medieval castle ruin and a small Gothic church. Henceforth, the horizon would be coloured by the addition of a Greek temple that, to complete an admittedly eccentric picture, was placed on a colossal base leading down to the River Danube. This same flight of stairs had just been ascended by a number of German princes and foreign diplomats. They had come to attend the opening of a ‘pantheon’: a building dedicated to the memories of great men, heroes, illustrious men, in short, ‘exemplary men’. In front of the temple’s entrance, the guests had been welcomed by maidens representing the states of the German Confederation. These girls, dressed in white togas, sang about ancient lands, brave heroes and the freedom regained from French Emperor Napoleon at the dawn of the nineteenth century. The festivities made for an imposing sight. The British newspaper The Times reported how this pantheon would be ‘the Palladium of modern Germany, and the name of its Royal founder will, until the most remote ages, fill a large place in the recollectionof everyone who has a German heart’.2 Twenty-nine years after the Battle of Leipzig had shattered Emperor Napoleon I’s hegemony in the German states, King Ludwig I of Bavaria inaugurated the ‘child of his love’ called Walhalla.3

National Culture Historical Narrative Symbolic Codification Cultural Hegemony Ancient Land
These keywords were added by machine and not by the authors. This process is experimental and the keywords may be updated as the learning algorithm improves.
This is a preview of subscription content, log in to check access.