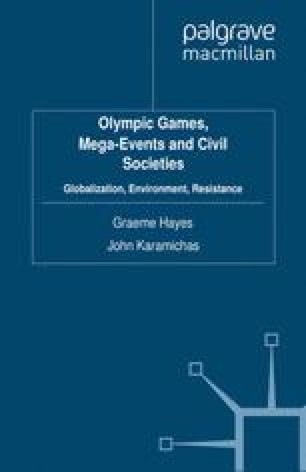 Olympic Games as an Opportunity for the Ecological Modernization of the Host Nation: The Cases of Sydney 2000 and Athens 2004

The greening of sports mega-events, and the hosting of Olympic Games in particular, is now reasonably well established. The potential international disgrace that a host nation might experience due to construction delays gives added impetus for their completion on time; the same appears to be the case for projects relating to environmental commitments made by the host nation. This temporal pressure of the event has the potential to accelerate much-needed environmental reform on the one hand, and to bring ENGOs as consultants into the planning of key Olympic projects on the other. Yet evidence from the first decade of environmentally conscious Olympics points to diverging patterns of achievement in the operationalization of the IOC’s ‘third pillar’. As is now common knowledge, for example, Sydney 2000 was the first ‘green Olympics’ in the history of the Games; yet four years later, Athens provided a stark contrast, and was the subject of highly critical assessment reports by both the WWF (WWF-Greece 2004) and Greenpeace (2003, 2004a, 2004b).

Kyoto Protocol Host Nation Environmental Impact Assessment Olympic Game Ecological Modernization
These keywords were added by machine and not by the authors. This process is experimental and the keywords may be updated as the learning algorithm improves.
This is a preview of subscription content, log in to check access.