Value and Virtue in Public Administration 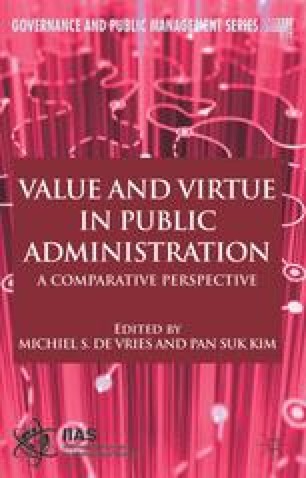 Value and Virtue in Public Administration pp 1-16 | Cite as

Introduction to Value and Virtue in Public Administration

Public values are defined as those values that provide normative consensus about: (1) the rights, benefits, and prerogatives to which citizens should (and should not) be entitled; (2) the obligations of citizens to society, the state, and one another; and (3) the principles upon which governments and policies must be based (Bozeman, 2007: 13). Public values have been central to public administration over the years and the key public values are equity, impartiality, justice, honesty, fairness, probity, continuity, secrecy, accountability, transparency, responsiveness, and so on. However, the significance of public values is said to have declined in recent years. Barry Bozeman (2002) warns us about the emerging problem of ‘public-value failure’ because public-value failure occurs when: (1) mechanisms for the articulation and aggregation of values have broken down; (2) ‘imperfect monopolies’ occur; (3) benefit hoarding occurs; (4) there is a scarcity of providers of public value; (5) a short time horizon threatens public value; (6) a focus on substitutability of assets threatens conservation of public resources; and (7) market transactions threaten fundamental human subsistence. Based on the following works concerning: what exactly public values are and which specific values are the most important (Beck Jørgensen and Bozeman, 2007; Feeney and Bozeman, 2007), what constitutes the ‘publicness’ of specific values (van de Wal et al., 2008), and how public values can be safeguarded and reconciled (de Bruijn and Dicke, 2006; Kernaghan, 2000), van de Wal (2009) also asserts that public values are often not met enough by certain public policies because of an overemphasis on economic individualism.

Public Sector Civil Servant Public Administration Good Governance Public Administrator
These keywords were added by machine and not by the authors. This process is experimental and the keywords may be updated as the learning algorithm improves.
This is a preview of subscription content, log in to check access.