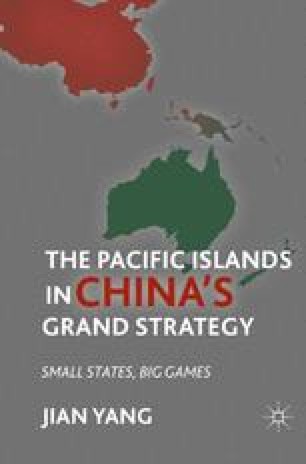 The South Pacific region is a huge area stretching 17,000 km longitudinally from Australia and Papua New Guinea (PNG) in the west to South America in the east, and 7,000 km latitudinally from the equator to the Antarctic Ocean.1 There are two key regional organizations in the South Pacific—the Pacific Community (PC, formerly known as the South Pacific Commission) and the Pacific Islands Forum (PIF, formerly known as the South Pacific Forum). While the PC consists of 22 members including colonial territories, the 16 members of the PIF are either sovereign or self-governing states. Since China’s regional interactions in the South Pacific are mainly centered on the PIF, the term South Pacific used in this book refers to the 14 Pacific island countries (PICs) in the PIF excluding Australia and New Zealand. These 14 PICs are the Cook Islands, the Federated States of Micronesia (FSM), Fiji, Kiribati, the Marshall Islands, Nauru, Niue, Palau, PNG, Samoa (known as Western Samoa before July 1997), the Solomon Islands, Tonga, Tuvalu, and Vanuatu. The Cook Islands and Niue are self-governing states in free association with New Zealand. The other 12 PICs are fully independent sovereign states and member states of the United Nations.

Pacific Island Solomon Island Marshall Island Cook Island Pacific Island Country
These keywords were added by machine and not by the authors. This process is experimental and the keywords may be updated as the learning algorithm improves.
This is a preview of subscription content, log in to check access.