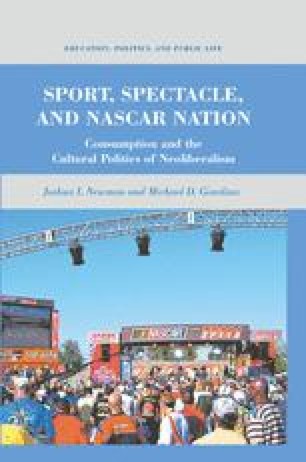 We have heretofore outlined that, on the balance sheet, NASCAR’s salient place within the cultural politics of the (paleo-/neo-) conservative/neoliberal conjuncture produced tremendously lucrative brand equity during the Bush vicissitude. By the of the 2007 season, NASCAR’s publically traded International Speedway Corporation reported revenues of $816.6 million, an increase of 2.3 percent from the previous year (“ISC Annual Report 2008,” 2008). To sustain the rate of growth, NASCAR realized during the first eight years of the 2000s ($440m in revenues in 2000)—a rate that, at the time, would have left investors looking for approximately $2 billion in revenues from stock car-related organizations by 2020—NASCAR executives have in recent years actively sought new ways to enhance existing commodity streams and develop new forms of surplus value. Beyond most predictable twenty-first century techniques for enhancing sport-based accumulation (e.g., raising ticket prices, increasing commercial saturation in the form of new niche advertising and sponsorship, continuing the expansion of venue spaces), NASCAR executives have begun to more radically diversify their commodity wares and experiences.

Free Market Cultural Politics Illegal Alien Consumer Debt White Supremacist
These keywords were added by machine and not by the authors. This process is experimental and the keywords may be updated as the learning algorithm improves.
This is a preview of subscription content, log in to check access.