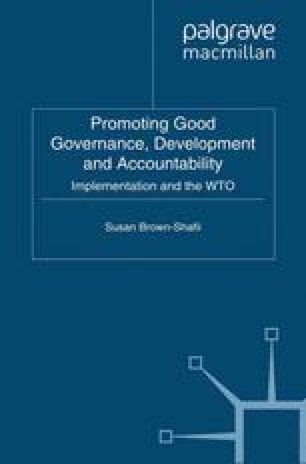 The purpose of this book has been to serve as a politically oriented ‘reconnaissance’, looking both down and across different institutional and disciplinary contexts to examine the question of the extent to which one WTO Agreement might be used to promote good governance, development and accountability, as well as trade liberalization. The Agreement in question is the plurilateral 1994 Government Procurement Agreement, including the revisions that were provisionally adopted in December of 2006. (For further details, see the texts of these Agreements in, respectively, Appendices 1 and 2.) Along with the liberal multilateral trading system of which it is a part, the current legal text of the GPA served as a foundation from which the exercise proceeded; the initial chapter was dedicated to a review of the history and political objectives of this Agreement. That story, as we saw, is one that has previously been well-documented (Blank et al., 1996; Woolcock, 2006). We could not escape re-telling it, however, because one cannot appreciate the comparative politics underlying the Agreement without a solid grasp of this technical infrastructure.