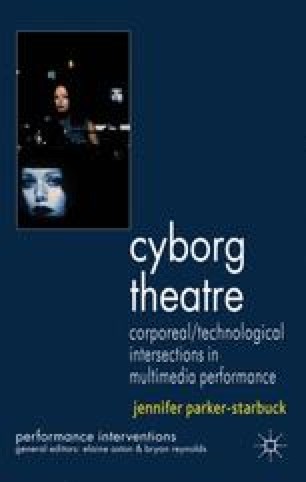 The transformations in the body’s relation to technology have, over time, produced large cultural shifts, and I find myself, an academic city-dweller at large, in a world resembling Gilles Deleuze and Félix Guattari’s “machinic assemblage”: a world of multiplicities, of organisms, and that which can unsettle them, merge with them. The cyborg emerges as one such merging, a “cybernetic organism” comprised of part organic/living organism and part synthetic/technological material. Ranging from the fictional imaginary of Frankenstein’s monster or Star Trek’s Borg to the reliance upon eyeglasses or hearing aids, to literal prosthetic limb extensions and internal mechanical valve replacements; to the conceptual interfaces such as “smart” weaponry that “thinks,” or the augmentation of non-human bodies such as insects that are being machinically augmented, the cyborg has emerged in fiction, popular culture, science, the military, and in daily life as a representation of the often tangled line between bodies and technology. Taken literally (as a visual or physical composite) — a body fixed in its co-mingling of parts, machine and flesh — the cyborg has been considered “monstrous” and is often a figure out of control, feared or feminized, appearing at times to quell anxieties about technologies and “others”; taken metaphorically (and of course, the cyborg has largely always been metaphoric, and I make the distinction in terms of how it has been seen or understood), the cyborg is politically resistant, an idea, as Donna Haraway has famously proposed, of “transgressed boundaries, potent fusions, and dangerous possibilities which progressive people might explore as one part of needed political work” (1991b: 154).

Star Trek Subject Body Conceptual Interface Digital Performance Human Organ Transplant
These keywords were added by machine and not by the authors. This process is experimental and the keywords may be updated as the learning algorithm improves.
This is a preview of subscription content, log in to check access.