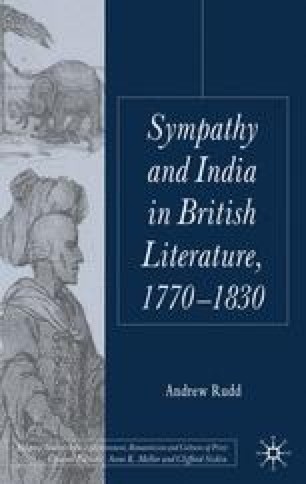 The book comes full circle to find that sympathetic engagement with India became possible only through the medium of heavily ‘Westernised’ forms of representation, either through the ‘costume poetry’ of Jones, later reworked by Moore, or through the depiction of Indian suffering in uniquely affecting terms within European schemes of aesthetics, the discursive practice initiated by Burke. Evangelical writers appropriated this latter form of representation but adapted it so that sympathy might only be felt for the Indian victims of Brahminical or Mughal (not British) cruelty, demonising the customs and institutions of India in the process. All of this left the possibility of representing the ‘real’ India in Britain in doubt, for in both cases the country and the people were surrendered to the widespread acknowledgement that culturally and geographically remote entities such as the subcontinent were beyond the scope of the European imagination.

British Literature Emotional Expressiveness Discursive Practice British Reader European Scheme
These keywords were added by machine and not by the authors. This process is experimental and the keywords may be updated as the learning algorithm improves.
This is a preview of subscription content, log in to check access.