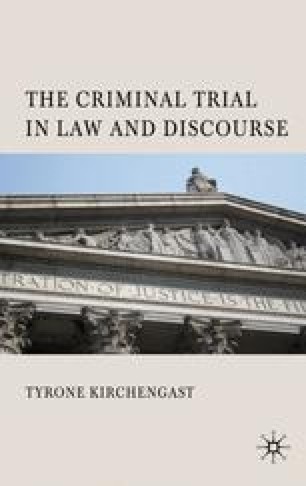 A Genealogy of the Trial in Criminal Law

The history of the criminal law and trial process has been published across various works. The work of some authors, such as Sir William Holdsworth, extends far beyond the scope of criminal law and procedure, developing this history through a chronology of the development of English law across some seventeen volumes. Other historians, such as Sir James Fitzjames Stephen, focused on the history of the substantive criminal law and trial process. This chapter departs from the approach of the legal historian for Foucault’s (1982) genealogical method to indicate the rise of the trial as a discursive institution of social justice. This method is adopted because it allows for an account of the criminal trial that differs markedly from previous historical accounts. Rather than focus on the trial as an institution that gradually adopted rules and procedures that made it more adversarial in character, I will examine the trial as an institution that was always ‘sociological’, as associated with the rights and interests of various parties and agents of justice. This analysis will consider more than traditional accounts of the emergence of adversarial justice from the eighteenth century: defendant rights, the introduction of counsel, a law of evidence, Crown or state prosecutors, and the independence of the judiciary. It is not that these developments are irrelevant to the development of the criminal trial. Instead, a different perspective on these developments will be considered that also accounts for the significant role played by victims, the community, and state. This perspective advances the argument that the criminal trial is an inclusive institution of social justice.

Thirteenth Century Trial Process Criminal Trial General Commission Customary Practice
These keywords were added by machine and not by the authors. This process is experimental and the keywords may be updated as the learning algorithm improves.

The danger lies in regarding history as something that is always already there, evolving ‘down through time’ in a positive direction.