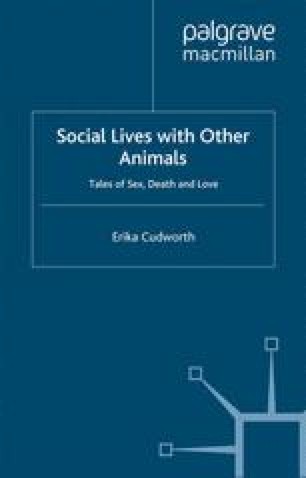 Social Lives with Other Animals pp 20-54 | Cite as

Relations, Power and the Limits of ‘Speciesism’

This chapter considers some of the themes and approaches developed within the emergent transdisciplinary ?eld of ‘animal studies’. My purpose here is to map the territory on which a more satisfactory sociological approach to thinking about Other animals might be grounded. Chapter 3 will discuss why the discipline of sociology has come late to animal studies and will outline a theoretical framework for analysing species as a system of social relations. It will have to suf?ce at this point, to say that talking about non-human animals and the ultimate Other of species has proven dif?cult for a discipline whose boundaries were historically constituted around the designation of a sphere, an arena for study – ‘the social’ – which was de?ned as exclusively human. However, as will be apparent in the pages that follow, some sociologists are attending to questions of species difference. There have been attempts to understand human-animal relations in terms of historical change, looking at animal ‘rights’ as a social movement, for example; or examinations of changes in dominant forms of human-animal relations in modernity. Others have been interested in representations of animals in various cultural forms; or have examined the material contexts (such as industrialized agricultural production, or domesticated companionship) in which animals are socially constituted.

Social Life Social Institution Human Relation Nonhuman Animal Companion Species
These keywords were added by machine and not by the authors. This process is experimental and the keywords may be updated as the learning algorithm improves.
This is a preview of subscription content, log in to check access.