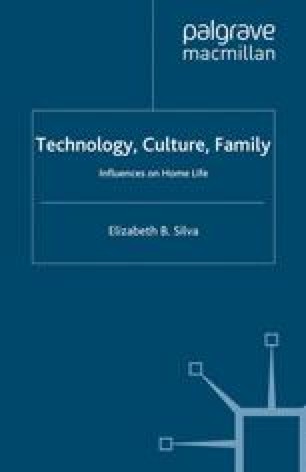 Social processes happen over time but they also happen all the time. In this chapter I argue that people’s routine practices are of great importance for broader movements in society and that relative uses of time reveal the interrelation of both subjective and materially informed bases of social life. One of my concerns is to focus attention in social and cultural theorising on making ordinary uses of time prominent. I am mindful that reflections about time in everyday life figure in recent sociological work (Bourdieu, 1992a; Giddens, 1991; Beck, 1992). Yet, despite the recognition that routines matter, concerns in this mainstream theorising remain somewhat abstract, with the most routine aspects of daily existence, like body maintenance, emotional nurturing and so on, not being seen as a relevant focus of grand theories. These have, however, been prominent in academic feminist perspectives since the middle of the 1970s. For instance, Dorothy Smith (1987: 81) remarked that it has been taken for granted that these ordinary matters are provided for in a way that does not interfere with social life in general, and thus will not affect conceptual models. The invisibility of these matters is linked to practices which position the subordinate groups as the carers for bodily and materially located needs (see also Tronto, 1993; Sevenhuijsen, 1998). Household chores, eating, dressing, reading, getting to work and so on have generally been regarded as unproblematic matters in social theory.

Domestic Labour Gender Division Personal Time Housework Time Everyday Routine
These keywords were added by machine and not by the authors. This process is experimental and the keywords may be updated as the learning algorithm improves.
This is a preview of subscription content, log in to check access.