Longevity and the Good Life 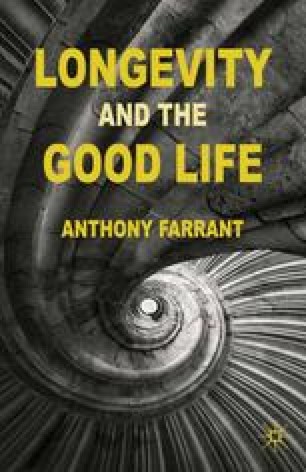 Longevity and the Problem of Overpopulation

The third aspect of increasing life spans to consider is their consequences, and my focus will be on the impact of extending longevity on the availability and distribution of resources. The global population is already expanding at a remarkable rate. Between 1930 and 1986 the world’s population expanded from two billion to five billion people and is now nearing seven billion people (Battin, 1998, p. 149; Guillebaud and Hayes, 2008). Population growth has traditionally been the result of high birth rates, with the control of population expansion focusing on reducing these rates. Increases in longevity, however, introduce a new dimension to controlling population levels. Substantial increases in longevity will inevitably mean a considerable reduction in mortality rates, which in turn could provide a new source of population growth.

Good Life Average Quality Indifference Curve Average Principle Worth Living
These keywords were added by machine and not by the authors. This process is experimental and the keywords may be updated as the learning algorithm improves.
This is a preview of subscription content, log in to check access.