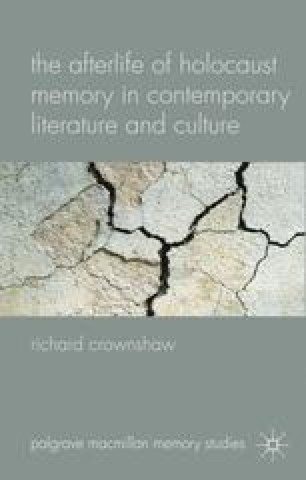 Bernhard Schlink’s novel of 1995, Der Vorleser (published as The Reader in 1996)1 has attracted a critical consensus that deems it to have reconfigured the perpetrator generation as victims of Nazism and second generation Germans as victims of Nazism’s legacy.2 Such an appropriation of victim status is part of a wider discourse of German suffering, prevalent in the 1990s and 2000s, which has often sought to elide the memory of suffering caused by Germans. This chapter argues that Schlink’s novel actually attempts to intervene critically in these proclivities of German cultural memory. Such an intervention needs to be understood in relation to the binary thinking that governs the remembrance and construction of Germany’s victims and perpetrators.

Grey Zone Normative Framework National Memorial Mass Murder Victim Status
These keywords were added by machine and not by the authors. This process is experimental and the keywords may be updated as the learning algorithm improves.
This is a preview of subscription content, log in to check access.