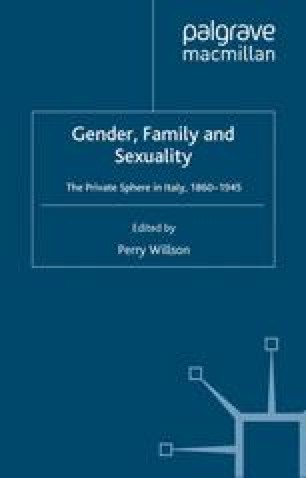 Women and the Public/Private Divide: The Salotto, Home and Theatre in Late Nineteenth-Century Italy

The growing importance of the domestic salotto1 in middle-class and lower-middle class households in the decades following Italian unification occurred at a time when the social demarcation and gendering of public space was becoming a feature of the rapidly expanding and changing urban landscape of Italy’s principal cities.2 Although located within the private sphere of the home, the function of the salotto was to provide an area where approved visitors and selected guests could be welcomed and entertained. It was the most visible aspect of a reorganisation of the domestic space whose purpose was to separate out, and therefore heighten, the privacy of some areas of the home, while others, such as the salotto, reserved for entertaining, were designed with an eye for what they said about the family’s life style and socio-economic standing. It was not, of course, the only criterion used in the partitioning of the home: gender was another, with rooms such as the study, library, or smoking-room intended as male-only preserves.

Department Store Dine Room Domestic Space Reception Room Conduct Book
These keywords were added by machine and not by the authors. This process is experimental and the keywords may be updated as the learning algorithm improves.

I would like to thank Perry Willson for her helpful comments on an earlier draft.