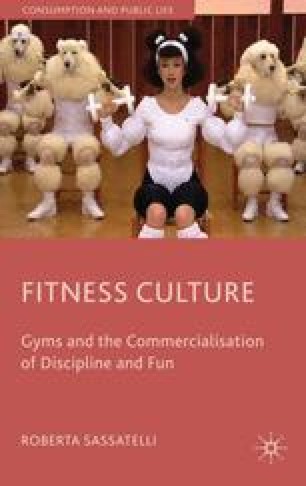 Introduction: Bodies, Consumers and the Ethnography of Commercial Gyms

In most cultures throughout history a variety of body decoration practices – in the form of clothing and adornment, or even tattooing and piercing – are fundamental to mark social identity. In Western modernity the human body has been invested with instrumental rationality, being disciplined as an instrument for work and labour, a utility, a function, while continuing to operate as the paramount symbol for the subject to demonstrate his or her being self-possessed, civilised or otherwise valuable. Ever more sophisticated bodily markers indicate both “diffuse social statuses” and individual “character”, that is, the actor's “conception of himself”, his or her “normality” or “abnormality” (Goffman, 1963a). The process of individualisation largely means that the sacred is translated at the level of the embodied self: a particular “civilised” bodily conduct based on the internalisation of social controls has become widespread as the norm (Elias, 1939) and a sort of “air bubble” around the body in ordinary life helps people project a sacred, deep self (Goffman, 1963a; 1967). In contemporary Western societies, the fit body has in many ways replaced body decoration as a potent symbol of status and character, both for men and women. As clothes are ever more revealing, what is fashionable is the actual sculpting of the body itself. The fit body appears to reconcile both instrumental and ceremonial values, ready to be dressed up or shown, it displays vitality and control, power and utility.

Nordic Walking Body Project Health Club Expert Discourse Exercise Manual
These keywords were added by machine and not by the authors. This process is experimental and the keywords may be updated as the learning algorithm improves.

You say “I” and you are proud of this word. But greater than this … is your body and its great intelligence, which does not say ”I” but performs “I”.