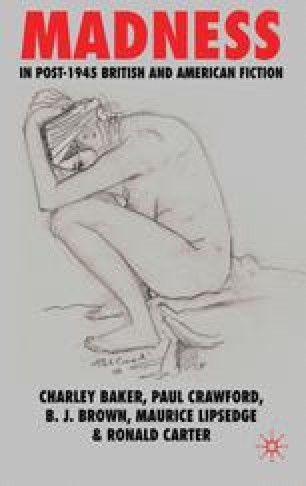 The post-war period of postmodernity provided a cultural and social milieu in which to discuss madness through a variety of discourses. Madness appeared, and continues to appear, to extend beyond occasional mental disruptions, through major mental illnesses and neuroses, to a base cultural condition. Both postmodernism and its literary outputs focus on madness to an unprecedented degree1. The postmodern novel is characterised stylistically and thematically by fragmentation of linear or coherent narrative, unreliable narration, and multiple and at times undifferentiated perspectives. Typically it is full of resonant themes of paranoia, conspiracy, and control, the individual’s position within powerful networks controlled by external agencies, and his/her experiences of real and imaginary — no longer distinct — categories. A number of fiction writers articulated the pervasive mood of uncertainty as post-industrial society emerged. Genre demarcation lines began to fragment, leading to a blurring of boundaries between story, essay, fiction, criticism, and history. Plagiarism, parody, and reappropriation of now-suspect white, masculine grand narratives became a feature for some authors, not least Kathy Acker, who reviewed questions of feminine reality through her deconstruction and rewriting within a previously male-dominated literary canon.

Stable Identity Grand Narrative Thought Insertion Thematic Concern Base Cultural Condition
These keywords were added by machine and not by the authors. This process is experimental and the keywords may be updated as the learning algorithm improves.
This is a preview of subscription content, log in to check access.