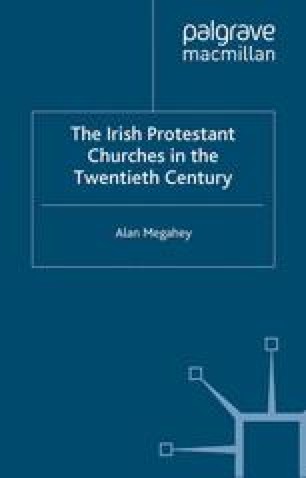 The census of 1901 revealed that there were 4.5 million people in Ireland. Because the Irish census (unlike that in the rest of the United Kingdom) contained a religious question, we know that three-quarters of the population were Roman Catholics. Virtually all the rest - 1,150,114 people - were Protestants. Proportionately, there were more Protestants in Ireland in 1901 than there had been 40 years earlier: 26% as against 22%. Numerically there were fewer, as the population of Ireland had fallen by over a million during that period; indeed it had been in decline since the famine in the 1840s. In 1831, before that dreadful event, Ireland’s population had been over half that of England and Wales; now it was just over a tenth. And the Protestant population of the whole of Ireland was about the same as the total population of Staffordshire or County Durham.

Twentieth Century Dreadful Event Small Church Established Church Institutional Church
These keywords were added by machine and not by the authors. This process is experimental and the keywords may be updated as the learning algorithm improves.

Religion - it means everything over here - everything mostly but what it ought to mean. A kind of badge or uniform, that’s what it is mostly, a sign of our ascendancy by right and force of law, something that marks and values us like a brand on a butter-tub. It puts us in classes, and keeps us there; just as if it was a curse laid upon us instead of God’s blessing.