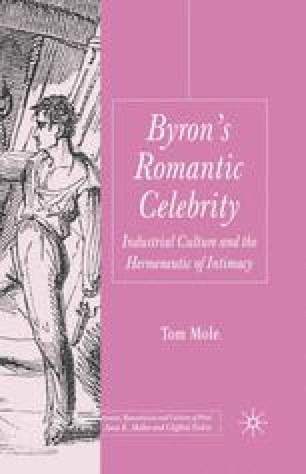 The Handling of Hebrew Melodies

By the end of 1814, when Childe Harold’s Pilgrimage was in its ninth edition and his verse tales numbered four, Byron was a poet with a number of problems. He had mined his experiences of exotic travels almost to exhaustion — he had some unpublished scraps of Oriental poetry, but seemed incapable of turning them into a fifth verse tale. The sheen had worn off his celebrity, making fame a fact of life which was rapidly becoming routine. Worse still, his series of four Turkish Tales was increasingly being charged with that most un Byronic of qualities: predictability. Lord Byron, it was whispered, had written himself out, and what was to come promised only paler and paler imitations of his former glories. Where once Byron’s poetry had made him a celebrity, it now seemed that his poetry would be read only because he was a celebrity. George Daniel, in The Modern Dunciad (1814), put the complaint into Popeian couplets:

The town is pleas’d when BYRON will rehearse,

And finds a thousand beauties in his verse;

So fix’d his fame — that write whate’er he will,

The patient public must admire it still;

Yes, — though bereft of half his force and fire,

They still must read, — and, dozing, must admiref.]1

Title Page Foreign Word Ninth Edition Religious Theme Patient Public
These keywords were added by machine and not by the authors. This process is experimental and the keywords may be updated as the learning algorithm improves.
This is a preview of subscription content, log in to check access.