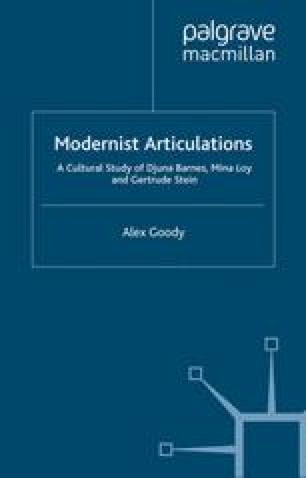 Gertrude Stein became a name recognised for more than extreme literary experimentalism when her The Autobiography of Alice B. Toklas became a bestseller soon after its publication in 1933. In this text Stein recalls meeting with Mina Loy in 1911 and describes Loy’s reading of her huge work in progress, The Making of Americans: ‘Mina Loy equally interested was able to understand without the commas. She has always been able to understand’ (A: 145). The instinctive understanding with which Stein endows Loy here suggests an affinity between them, a shared understanding ‘without the commas’ that could mark the presence of a mutual aesthetic. The ongoing acquaintance of the two women writers and their similar marginalisation from canonical modernism — Stein is mentioned but infrequently read, Loy is an occasional reference — could be mobilised as further evidence of the common ground from which their modernist experimentation proceeds. Loy’s close friendship with Djuna Barnes, their similar reclusiveness in later life and exclusion from the modernist canon, could be taken as the proof of their shared ‘outsider’ position, while Barnes’s sexuality could be used as a point of connection between her and Stein. A range of such textual and biographical coincidence has indeed been used as proof of an ‘other’ modernism that Barnes, Loy and Stein share (one which stands in opposition to the pronouncements and activities of mainstream modernists),1 but my intention is to avoid such narrow, causal accounts which reify an oppositional form of modernist practice.

Cultural Study Modernist Study Modernist Practice Woman Writer Modernist Writing
These keywords were added by machine and not by the authors. This process is experimental and the keywords may be updated as the learning algorithm improves.
This is a preview of subscription content, log in to check access.