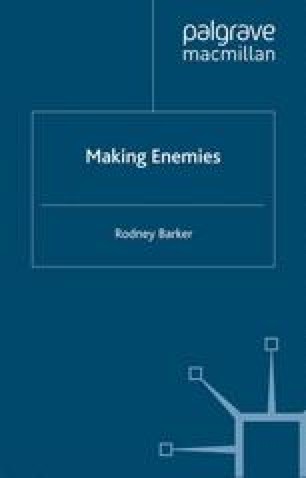 Patterns of Enmity: Varieties of Narrative

The rhetoric of hostility is a ubiquitous feature of politics and government. But the ways in which enemies are described, the nature of the perceived and alleged threats, the identification of enemies, the identity of the enmity narrator, and the context and consequences of narration, all differ widely. To say that enmity is a recurring feature of political life tells us only in the very broadest terms what to expect. It indicates a range of possibilities, but within that range an eclectic variety is all we can predict. Up to this point of the discussion, I have spoken of enmity and enemies as a single broad type, and discussed the various accounts of enmity in relation to this comprehensive category. But it is now both possible and desirable to make the discussion more precise, in order to distinguish the many points on a scale which can run from murderous calls for extermination, to restrained and civil competition in parliamentary politics.

Ideal Type Constitutional Democracy Foreign Power Threatening Group Objective Threat
These keywords were added by machine and not by the authors. This process is experimental and the keywords may be updated as the learning algorithm improves.

‘Beware the Jabberwock, my son!

The jaws that bite, the claws that catch!

Beware the Jubjub bird and shun