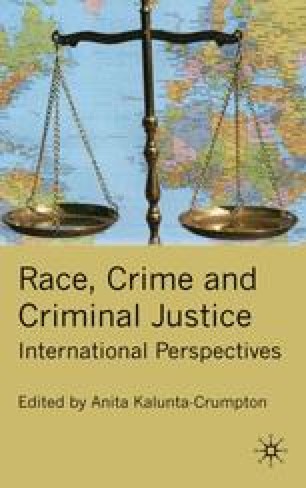 In Conclusion: Comparative Assessment of Race, Crime and Criminal Justice in International Perspectives

This book opened with a focus on race using two broad categories — white (European descent) and non-white (non-European descent) — for emphasis. Whites are identifiable by their physical characteristics. Non-whites compose a range of racial groups that can be visually categorized according to similarities of physical appearance shared by each racial group. The above few lines of a description of ‘race’ may seem elementary since common knowledge of this fact about human variations may seem to render this basic tutorial unnecessary. But I deem this piece of information important because it points to the role of marked physical features — primarily skin color — as a crucial starting point in the negotiation of interactions between people who share similar or different physical characteristics. Within this framework, the purpose of the book was to use visible physical characteristics as a base for assessing any differentials or similarities in how crime is interpreted and responded to in the various countries covered in this book.

Criminal Justice Criminal Justice System Violent Crime Racial Discrimination Hate Crime
These keywords were added by machine and not by the authors. This process is experimental and the keywords may be updated as the learning algorithm improves.
This is a preview of subscription content, log in to check access.