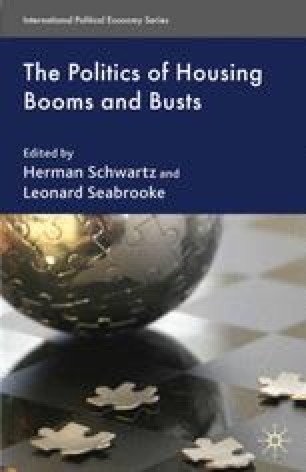 Origins and Consequences of the U.S. Subprime Crisis

The same dynamics driving the housing boom in the U.S. and elsewhere also drove the boom off the rails, producing the current global financial crisis. As in all booms, the bubble burst when the boom used up its fuel. Global disinflation, the recycling of U.S. trade deficits, and a ready supply of new buyers at the bottom of the U.S. housing ladder powered the boom. When these gave out, so did the boom. During the 1990s, U.S. multinational and retail firms offshored more and more labor intense production to low cost Asia, producing a flood of ever cheaper nondurable goods,this lowered official inflation rates and thus the corresponding interest rates for mortgages. Simultaneously, European and Asian recycling of trade surpluses allowed U.S. arbitrage in global financial markets — the U.S. was able to borrow short term at low interest rates while investing overseas long term at higher rates of return. This also lowered interest rates for mortgages. Cheap mortgages lured millions of aspiring U.S. homebuyers onto the bottom rungs of the housing ladder. These new housing market entrants generated trillions of dollars of fictitious capital gains for incumbent homeowners, freeing them to move up the housing ladder and spend freely. As Schwartz (Chapter 2 of this volume) argued, the U.S. housing finance machine transformed these inputs into extra aggregate demand and thence into differential growth for the U.S.

Interest Rate Central Bank Housing Price Credit Risk European Central Bank
These keywords were added by machine and not by the authors. This process is experimental and the keywords may be updated as the learning algorithm improves.
This is a preview of subscription content, log in to check access.