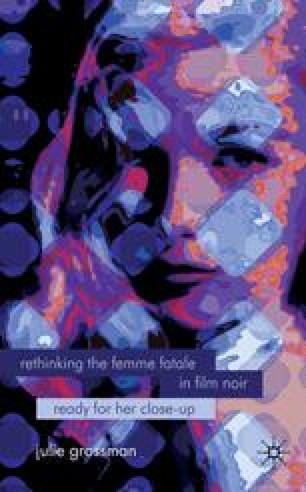 In this chapter, I’ll be talking principally about David Lynch’s Mulholland Drive (2001), although I include a fairly extensive study of Billy Wilder’s Sunset Boulevard (1950), an original-cycle film noir text that certainly influenced Lynch’s film significantly. I want to end with a discussion of Mulholland Drive because I believe it points toward unraveling some of the problems with representations of female agency I’ve addressed throughout this study. Mulholland Drive takes on the project of deconstructing the “femme fatale” figure and provides a filmic instance of what I think needs to be done in reimagining the relationship between feminist representation and female agency, as well as a cultural discourse suspicious of and resistant to both kinds of expression.

Female Character Borderline Personality Disorder Female Agency Female Image American Dream
These keywords were added by machine and not by the authors. This process is experimental and the keywords may be updated as the learning algorithm improves.
This is a preview of subscription content, log in to check access.