The Comparative Economics of Sport 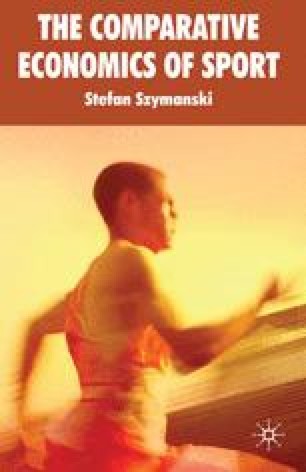 As this chapter goes to print [April 2002], Major League Baseball (MLB) has announced plans to contract from thirty to twenty-eight teams, refusing to permit the relocation of a financially troubled Montreal franchise to our Nation’s capital and strongly hinting that the refusal of Minnesota taxpayers to subsidize a new stadium will result in the demise of the Minnesota Twins.1 At the same time, Los Angeles has more than enough basketball fans to support two teams, but a wealthy mogul continues to steward the Clippers into new lows of mediocrity.2 When Tennessee wanted a pro football team, they had to shell out over $292 million in taxpayer money to lure the Houston Oilers.3 The National Hockey League has doled out American expansion franchises so artfully that the Montreal Canadiens pay more than triple the tax bills of all their American rivals combined.4 Why does this happen?

Supra Note National Football League Major League Baseball Comparative Economic National Basketball Association
These keywords were added by machine and not by the authors. This process is experimental and the keywords may be updated as the learning algorithm improves.
This is a preview of subscription content, log in to check access.