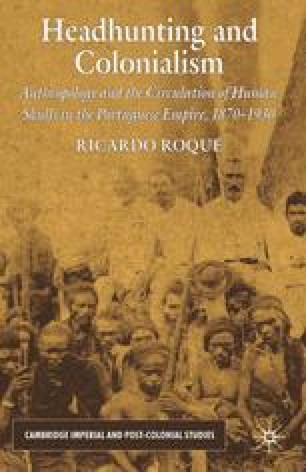 Collecting and the Dramas of Colonial Hostility

In the previous chapter the interaction between historical stories and anthropological knowledge has been examined in the context of a controversy about the authenticity of the Coimbra collection. In the 1930s, conflicting narratives about the colonial past of the Timorese crania intruded into anthropological constructs. Throughout the twentieth century, the diffuse historical identity of the collection was expressed in two contrasting narratives. Some stories attributed the origin of the skulls to a Timorese massacre of Portuguese troops in Cová in 1895–96, while others associated them with indigenous victims of Timorese headhunting, during unspecified conflicts near the Dutch border sometime prior to 1882. Both narratives, however, accepted the skulls had been collected from a ‘sacred tree in Cová’. This chapter reassesses these accounts, by looking at the colonial episodes of collecting. In addition, the chapter unearths the ‘lost’ documentation of the collection and offers an alternative account of its colonial history.

Human Head Social Drama Human Remains Catholic Priest Sacred Tree
These keywords were added by machine and not by the authors. This process is experimental and the keywords may be updated as the learning algorithm improves.
This is a preview of subscription content, log in to check access.