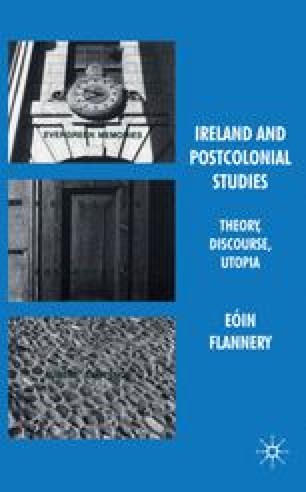 The critical pioneer of contemporary postcolonial studies, Edward W. Said, notes in his introduction to Orientalism that ‘what I learned and tried to present was that there was no such thing as a merely given, or simply available, starting point: beginnings have to be made for each project in such a way as to enable what follows from them’ (1978: 16). Thus, in a critical survey of Irish postcolonial studies, there is no natural starting point. Equally, when I trace the genealogical roots of theoretical postcolonial studies to Said’s 1978 intervention, it is a matter of contingent selection. There is no natural beginning, or for that matter consecrated telos, in the discourse of critical analysis; the contingency of critical interrogation is matched by the contingency of the selection of texts. My ‘beginnings’ are dictated by a conviction that Said’s Orientalism provided, and provides, an extraordinary stimulus and precedent to more recent Irish postcolonial criticism. In asserting Said’s precedence I am not diminishing the import of Atlantic historiography; subaltern studies; Marxism; feminism or post-structuralism or postmodernism, but, as Luke Gibbons remarks in discussing the legacy of Edmund Burke: ‘An exemplary text or event, to adapt Seamus Deane’s formulation, is both a culminating moment in a process or series of events already under way, but is also a disruptive, originating moment in the subversion of that process, an omen of things to come’ (2003b: 5).

Modernisation Theory Irish Study Irish Context Postcolonial Theory Colonial Study
These keywords were added by machine and not by the authors. This process is experimental and the keywords may be updated as the learning algorithm improves.

I am so grateful to Ireland, especially for its literary and cultural example. You have had many more years of imperialism than we have had, and you have produced a fabulous culture of resistance and an extraordinary spirit, which I desperately hope we [the Palestinian people] can measure up to by about 10 per cent… There are three places that have meant a great deal to me; one is South Africa, another is Ireland, and the third is India. These places have meant a great deal to me culturally, not just because there was always a spirit of resistance, but because out of it, there is this huge cultural effort which I think is much more important than arms, and armed struggle.1