Political Warfare against the Kremlin 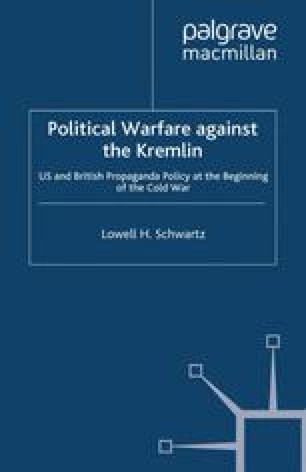 Political Warfare against the Kremlin pp 70-95 | Cite as

As noted in Chapter 2, British propaganda strategy during the early years of the Cold War focused on bolstering democratic elements in Western Europe, with far less time and effort being spent on activities aimed at undermining and destabilizing Communist control of Eastern Europe and the Soviet Union. One of the major reasons the IRD endorsed this approach was its assessment that Britain lacked the ability to conduct many of the offensive propaganda operations the military was advocating. Britain’s inability to conduct propaganda operations inside the Soviet Union stemmed from the extensive control devices imposed on Soviet society by the Communist regime, which sought to eliminate all social, economic, and political contact between the Soviet Union and the West. This Iron Curtain severely limited the West’s ability to communicate with the Soviet people, let alone influence them to adopt a more favorable attitude toward British policies. The only instruments capable of breaking through these controls were the BBC Russia Service and other short-wave radio stations.

Minority Language British Government Soviet Government News Service News Bulletin
These keywords were added by machine and not by the authors. This process is experimental and the keywords may be updated as the learning algorithm improves.
This is a preview of subscription content, log in to check access.