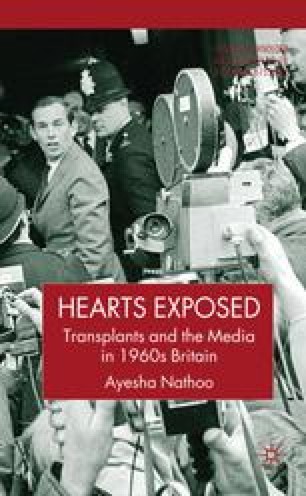 The first human heart transplant was a phenomenally public event that received unprecedented media coverage for a medical undertaking. How and why the operation became such big news depended on not just the elements of the story itself, but also on the nature and structure of the media. The post-war period witnessed drastic changes in the types of media and organizations involved in delivering medical news, as well as in the style and content of reporting. Domestic television transformed communication in the 1950s — a period when the dominant form of medical news moved away from health reporting and medical politics to a primary focus on medico-scientific innovation. In the socially and politically volatile environment of the 1960s, journalists took on an investigative style of reporting, patients became more demanding and medicine started to become vulnerable to public critique.

Royal College Medical News General Medical Council Public Service Broadcast Nuremberg Code
These keywords were added by machine and not by the authors. This process is experimental and the keywords may be updated as the learning algorithm improves.
This is a preview of subscription content, log in to check access.