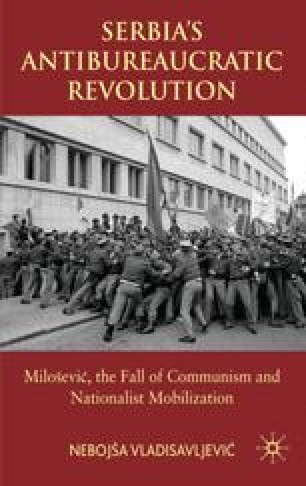 During the greater part of the Cold War Yugoslavia stood out from its East European communist counterparts in terms of having a foreign policy independent from the Soviet bloc and a relatively liberal form of communism and complex multi-national federalism. These aspects of so-called ‘Yugoslav exceptionalism’ feature prominently in the literature on Yugoslavia.1 Similarities between these states have received less attention, apart from during the early stages of Yugoslavia’s political development, and research on late Titoist Yugoslavia increasingly focused on multi-national features of the state (but see Bokovoy et al. 1997). Still, the communist character of the regime remains essential in explaining Yugoslavia’s uneven political development, including both periods of political stability and periods of conflict. The regime’s changing formal and informal institutions, and relations with society, strongly shaped the potential for popular mobilization, its timing and expansion, as well as forms of popular protest and its implications. Yugoslavia was principally a communist state, even if its authoritarianism in the last two decades of the Cold War was of a peculiar nature—highly decentralized, both functionally and territorially.

Foreign Policy Political Stability Federal Policy Regional Leadership Soviet Bloc
These keywords were added by machine and not by the authors. This process is experimental and the keywords may be updated as the learning algorithm improves.
This is a preview of subscription content, log in to check access.