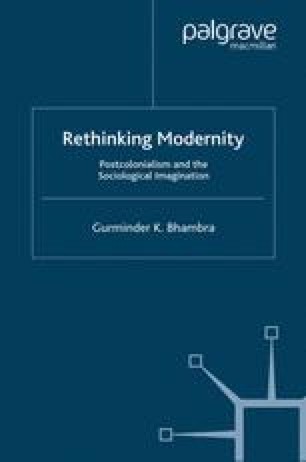 Modernity, Colonialism, and the Postcolonial Critique

In this chapter, I shall discuss the emergence of postcolonialism and the nature of the challenge it poses for standard approaches to social theory. I start by addressing the relationship between colonialism and the politics of knowledge production, looking, in particular, at the processes by which particular forms of disciplinary knowledge came to be authorized under colonialism and the concomitant marginalization of ‘other’ forms of knowledge. This will be followed by a discussion of the emergence of Subaltern Studies as a particular manifestation of postcolonial historiography. The standpoint of the subaltern has been one way in which academics have sought to reclaim the subjectivity of the previously marginalized, but this has not been an unproblematic venture. In questioning standpoint theory, then, I suggest that the attempt to reconcile particular experiences and general categories is best served through an alternative approach, one that builds on the idea of ‘connected histories’ (Subrahmanyam 1997). This is a precursor to the discussion of the rather different historiographical assumptions built into standard sociological accounts, which will be discussed in the following chapter.

Disciplinary Knowledge Historical Consciousness Postcolonial Theorist Indian History Colonial Relation
These keywords were added by machine and not by the authors. This process is experimental and the keywords may be updated as the learning algorithm improves.
This is a preview of subscription content, log in to check access.